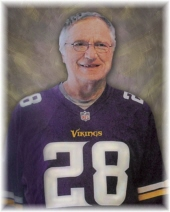 Roger Lindberg, age 68, of Sibley, Iowa, passed away on Wednesday, May 1, 2019 at the Veterans Affairs Hospital in Sioux Falls, South Dakota. Memorial Services will be Sunday, May 5, 2019 at 3:00 P.M. at the First Reformed Church in Sibley. Rev. Luke Schouten officiating. Visitation will be prior to the Memorial Service from 2:00 P.M. to time of service at the First Reformed Church in Sibley. There will be no burial. Roger Merle Lindberg was born on December 2, 1950 in Canby, Minnesota. He was the son of John and Gladys (Lund) Lindberg. He lived his youth and attended school in Canby. Roger served in the United States Army in Vietnam during the Vietnam War and was honorably discharged after one tour. He then attended a vocational school for 4 years, studying accounting, soil and fertilizer. He also studied at a John Deere parts school and worked as a John Deere parts man. He was united in marriage to Betty Conlan of Vineland, New Jersey on August 12, 1978 in Brookings, South Dakota. While living in Minnesota, Roger worked for a well digging company, National Lead Company and Fannie Farmer. They moved to Sibley, Iowa. Roger was employed by Packerland in Hospers, Iowa, BSI in Hartley, Iowa, and Jim's Bake Shop in Sibley. Jim helped Roger get a job at the Sibley/Ocheyedan School as a custodian, where he worked for 19 years before retiring. Betty passed away on February 18, 2009. Roger liked to read faith based books and donate them. He was an avid Vikings Football fan. He enjoyed cake decorating with his wife. He always took time to be with his family. Roger was a member of the First Reformed Church in Sibley. He was a V.F.W., American Legion, D.A.V., and C.B.N. member. He passed away on Wednesday, May 1, 2019 at the Veterans Affairs Hospital in Sioux Falls, South Dakota. Those left to cherish his memories are his children, Jennifer Lindberg of Sibley, IA, Richard (Mikalynn) Lindberg of Sibley, IA, Becky Lindberg of Orlando, FL, Anthony Lindberg of Washington; granddaughter, Lora Lindberg of Sibley, IA; daughter-in-law, Beth Lindberg of Sibley, IA; two sisters, Judy Fashant of Maple Grove, MN and June Jahn of King George, VA. He was preceded in death by his wife, Betty Lindberg, and his parents. In Loving Memory Of Roger Lindberg Born: December 2, 1950 Passed Away: May 1, 2019 Age: 68 years, 4 months and 29 days MEMORIAL SERVICE Sunday, May 5, 2019 at 3:00 P.M. First Reformed Church, Sibley, Iowa Family Prayer Service at 2:45 P.M. OFFICIATING Rev. Luke Schouten MUSIC Organist: Gerald Van Diepen Congregational Songs "How Great Thou Art" "Rock of Ages" "Amazing Grace" URN AND FLAG BEARER Family MILITARY HONORS V.F.W. and American Legion, Sibley, Iowa Following the Memorial Service, the family invites all for fellowship and lunch at the church. ARRANGEMENTS BY Andringa Funeral Home Larry R. Andringa, Funeral Director

To order memorial trees or send flowers to the family in memory of Roger Lindberg, please visit our flower store.