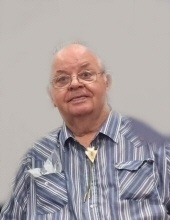 Ronald L. Kruse
Paullina, Iowa
Services for Ronald L. Kruse, age 85, of Paullina who passed away on Thursday, July 8, 2021, at Orange City Area Health System. His funeral service will be at 3:00 P.M. on Monday, July 12, 2021, at St. John Lutheran Church in Germantown with Rev. Donald Erickson ~ officiating.
Burial will be at St. John Lutheran Cemetery in Germantown.
Visitation with family present will be from 4 – 6 P.M. on Sunday, July 11, 2021, at the Eldridge Family Funeral Home in Paullina.

CONGREGATIONAL HYMNS
“How Great Thou Art”
“I’m But a Stanger Here”
“What a Friend We Have In Jesus”
“Come Thou Font”
Organist: Jolene Erickson

RONALD L. KRUSE
Ronald Lee Kruse the son of Truman and Verna (Richter) Kruse was born December 21, 1935 in Caledonia Township, O’Brien County, Iowa. He received his education at St. John Lutheran School and graduated from Paullina High School. On July 12, 1958, he was united in marriage to Doris Traver at Zion Lutheran Church in Paullina. He served his country by joining the National Guard in Cherokee. Ron was employed at many places running his own Standard Station in Paullina, working for Mid-American Pipeline, ran Kruse’s Grocery in Paullina, had his own truck and worked as an electrician in the oil fields. Before his retirement he worked at Monfort in Worthington, Minnesota. The couple’s retirement years were spent in Paullina. Ron passed away on Thursday, July 8, 2021 at the Orange City Area Health System reaching the age of 85 years, six months and seventeen days.
He was baptized on January 5, 1936 and later confirmed on April 30, 1950 and was a lifelong member of the St. John Lutheran Church in Germantown. He enjoyed the special times he spent with his family, He enjoyed watching birds and collecting rocks which he made into jewelry.
He is survived by his wife of all most 63 years, Doris Kruse of Paullina; one son, Scott and his wife, Jean Kruse of Cherokee, Iowa; a granddaughter, Olivia; a foreign exchange granddaughter, Shania Rehmudin of Dar es Salaam, Tanzania; one brother, James and his wife, Marilyn Kruse of Granville, Iowa also other relatives and friends.
He was preceded in death by his parents and an infant sister.
To order memorial trees or send flowers to the family in memory of Ronald L. Kruse, please visit our flower store.