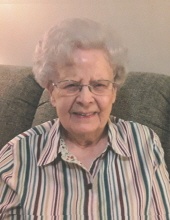 Private Family graveside service will be held at East Lawn Cemetery in Sheldon.

MUSIC
Special Music by Dennis Ver Steeg
“In The Garden”


Arrangements under the care of the
Vander Ploeg Funeral Home; Sheldon, Iowa


Arrangements under the care of the
Vander Ploeg Funeral Home; Sheldon, Iowa

Rose Marie Van Loh was born, September 3, 1926, to Albert and Nella (Feldkamp) Helmers in Sibley, Iowa. Rose grew up on a farm and attended a rural school house and later graduated Valedictorian of Sibley High School in 1944. She then attended and graduated from Northwestern Bible College in St. Paul, Minnesota. Rose met and married Fred Van Loh on July 28, 1950. To this union were born two children, Linda and James.
The family lived in Sheldon, Iowa where Rose served as the church organist and pianist of Calvary Baptist Church for many years. She taught in the vacation bible school and served along with her husband, Fred Van Loh. Together, they were the original charter members of Calvary Baptist Church. She was a wonderful hostess and enjoyed entertaining to everyone that entered her home. She was a secretary for the Sheldon Elementary School and also secretary for area attorney offices.
She is survived by her children, Linda (Steve) Killian of Valencia, California and James (Rochelle) Van Loh of Sibley, Iowa. Grandchildren, Jonathan Killian, Amy (Killian) Studarus, Rachel Lawson, Lyndsey Van Loh, Kelsey Van Loh; great grandchildren, Tate and Harper Studarus, Brynly, Connor and Cadence Killian, Dawson Corle and Alanna Oster; a brother, Glenn (Helen) Helmers.
She was preceded in death by her husband, Fred Van Loh, her parents, Albert and Nella Helmers, twin brother, Roger Helmers, Brother, George Helmers.


To order memorial trees or send flowers to the family in memory of Rose Marie Van Loh, please visit our flower store.