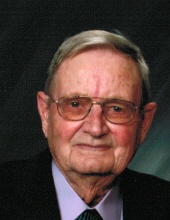 Ruben H. Winter
Sheldon, Iowa
Services for Ruben H. Winter, age 92, of Sheldon who passed away on Monday, November 22, 2021, at his residence. His funeral service will be held at 10:30 A.M. on Saturday, November 27, 2021, at St. John Lutheran Church in rural Boyden with Pastor Mark Jamison ~ officiating.
Burial will be held at St. John Lutheran Cemetery in rural Boyden with military rights by McGlothlen-Cowie Post of the American Legion.
Visitation will be after 3 P.M. on Friday, November 26, 2021, with family present from 5 – 7 P.M. at the Andringa Funeral Home – Sheldon.

After today’s graveside service, relatives and friends are
Invited to join the family in the fellowship hall of the church.

Ruben Helmut A. Winter was born on October 15, 1929, in Olivet, South Dakota. He was the son of Herman and Margaret (Heinsohn) Winter. He was baptized on November 10th, 1929. In 1930 Ruben and his family relocated to a farm near Boyden, Iowa where he attended parochial school, and was confirmed at St. John Lutheran Church. He graduated from Sheldon High School in 1947. Ruben was drafted into the Korean War. He served in the United States Army as Corporal from 1952 until 1954 when he was honorably discharged. On February 24, 1960, he was united in marriage to Louise Marie Techen at St. Paul Lutheran Church in Hull, Iowa. Together they dairied for 31 years, first in rural Boyden and then near Whitesboro, Texas. In 1991, they moved to Sheldon, Iowa. During Ruben’s retirement he worked for Sudenga’s and for the Ritter Elevator.
As a member of St. John Lutheran Church, Ruben served as president and deacon for many years. Ruben’s passion was dairying and he and Louise attended many dairy events where he loved showing his registered Holsteins under the Ru-Win prefix. As an avid dairyman, he was involved with numerous breed organizations and served on many boards. Ruben was proud of his family and was a faithful and devoted husband. He also enjoyed the opportunities that he and Louise had to take their children and grandchildren on trips. Ruben passed away with family by his side at his home on Monday, November 22, 2021, reaching the age of 92 years, 1 month, and 7 days.
Left to cherish his memory are his children, Sandra (Doug) Schoof of Primghar, Iowa and Roger (Ronda) Winter of Whitesboro, Texas; six grandchildren, Kristen Schoof of Spencer, Iowa, Lee (Brittany) Schoof of Harlan, Iowa, Rachael (Kevin) Terrazas-Dockery of Whitesboro, Texas, Rebecca (Justin) Winter-Hull of Pottsboro, Texas, Kara (Scott Robinson) Winter of Durant, Oklahoma, and Alec Schoof of Aberdeen, South Dakota; six great-grandchildren, Alex and Graysyn Terrazas of Whitesboro, Texas, Wynn and Brixxon Schoof of Harlan, Iowa, and Hunter and Kymber Hull of Pottsboro, Texas; two brothers, Alvin Winter of Whitesboro, Texas and Norven Winter of Boyden, Iowa; a sister, Luella Loges of Sheldon, Iowa; sisters-in-law, Shirley Techen of Sheldon, Iowa, Elaine Sohl of St. Paul, MN and Marlen Techen of George, Iowa; also other relatives and friends.
Ruben was preceded in death by wife, Louise Winter; son, Rodney Winter; parents, Herman and Margaret Winter; siblings, August Winter, Louise Uilk, Meta Fick, Hilda Uilk, Elsie Fick and Gerhardt Winter.
To order memorial trees or send flowers to the family in memory of Ruben H. Winter, please visit our flower store.