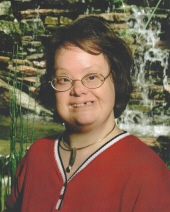 Ruth Kiel, age 61, of Sheldon, Iowa, passed away on Thursday, September 8, 2016 at the Osceola Community Hospital in Sibley, Iowa. Funeral Services will be Friday, September 16, 2016 at 10:30 A.M. at the Andringa Funeral Home Sheldon Funeral Service in Sheldon. Rev. Luke Wynja officiating. Burial to follow at East Lawn Cemetery in Sheldon. Visitation will be Thursday, September 15 from 3:00 to 5:00 P.M. at the Andringa Funeral Home Sheldon Funeral Service in Sheldon. Ruth Elaine Kiel was born June 18, 1955 to Steve and Henrietta (Hulstein) Kiel in Sioux Center, Iowa. She was the youngest of a family of four consisting of one brother, Sylvan Kiel and two sisters, Marianne Lautenbach and Donna VandenBerg. She lived on the farm outside of Sioux Center, Iowa where she enjoyed the farm animals and her pets which consisted of several dogs and a pony. The animals loved her. In March, 1965, the family moved to California where Ruth attended special education classes at Melbourne School in Artesia, California. Her mother was a teacher at the school so they went off every morning together. When her parents retired about twenty years later from their various work places, they moved back to Iowa. Ruth then attended Village Northwest Unlimited in Sheldon where she enjoyed her many classes and activities, especially working on the looms, ceramics, and in the kennels. She formed some wonderful friendships and went with friends to concerts, dances and on trips. Ruth liked computers and electronics and was fascinated by anything new and wanted to learn. She enjoyed playing games on her computer and later her IPad. She also enjoyed movies, music, and food, especially her mother's cooking. Every year Ruth would go on a trip to California to visit family and friends. She loved the warm weather and her annual trip to Disneyland and she would always ask to see the ocean. She would stay until New Years because she loved to go to the New Year's party to have great food and dance. Ruth had a very happy and loving personality. She had an amazing memory for faces and names. She was funny and loved to make other people laugh and smile. They could feel the joy that was in her heart. She was a devoted Christian and enjoyed reciting the Lord's Prayer at meals. She enriched the lives of her family and was truly loved. Her smiling face and infectious giggle will be missed. She was a member of the First Christian Reformed Church in Sheldon. Ruth passed away on Thursday, September 8, 2016 at the Osceola Community Hospital in Sibley. Those left to cherish her memories are her sisters, Donna (Joe) Vandenberg of Whittier, CA, Marianne (Chuck) Lautenbach of Seattle, WA, nieces, nephews and friends. She was preceded in death by her parents, Steve and Henrietta Kiel and her brother, Sylvan Kiel. In Loving Memory Of Ruth Kiel Born: June 18, 1955 Passed Away: September 8, 2016 Age: 61 years, 2 months and 22 days FUNERAL SERVICE Friday, September 16, 2016 at 10:30 A.M. Andringa Funeral Home Sheldon Funeral Service OFFICIATING Rev. Luke Wynja MUSIC Keyboard: Luann Donkersloot Congregational Songs "Amazing Grace" "In the Garden" "How Great Thou Art" CASKET BEARERS Family INTERMENT East Lawn Cemetery Sheldon, Iowa Following interment, the family invites all for fellowship and lunch at Cook's Caf�, Sheldon, Iowa. ARRANGEMENTS BY Andringa Funeral Home Sheldon Funeral Service Larry R. Andringa, Funeral Director

To order memorial trees or send flowers to the family in memory of Ruth Kiel, please visit our flower store.