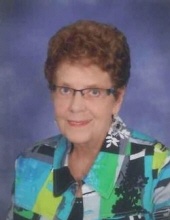 IN LOVING MEMORY OF
RUTH KORVER

Visitation will be held one hour prior to the service
on Friday, April 28, 2017 at Sheldon United Methodist Church.

CD MUSIC
Thy Will Be Done
Boldly I Approach

After the todays service relatives and friends are invited
to join the family in the fellowship hall of the church.

Arrangements under the care of the
Vander Ploeg Funeral Home; Sheldon, Iowa.

In lieu of flowers, memorials may be directed to:
Sanford Home Health & Hospice.

RUTH KORVER
Ruth Korver, the daughter of John and Bertha (Prins) Vander Berg, was born February 23, 1930 in Orange City, Iowa. She received her education from Sioux Center Schools, graduating in 1948. She went on to further her education at Westmar College in LeMars, graduating with a bachelors in education in 1951. On December 24, 1951, she was united in marriage to Arian Korver in Luverne, Minnesota, and the couple made their home in Sheldon, Iowa. Ruth taught for ten years before their first born. She then spent 21 years raising her children, she returned to the classroom as both teacher and student. At 50 years of age she went back to college to get her Special Education endorsement. She continued her second career in teaching for 12 years, retiring in 1995. Arian preceded Ruth in death on January 2, 2003. Ruth remained in Sheldon after his passing. Ruth passed away on Thursday, April 20, 2017 at Sanford Sheldon Medical Center in Sheldon, reaching the age of 87 years, 1 month and 27 days.
Ruth was an active member of the United Methodist Church in Sheldon. She enjoyed playing bridge, reading, and spending time with her children and grandchildren. She also enjoyed spending summers at Battle Lake, Minnesota. Ruth will be remembered for her kind heart and gentle soul.
Ruth leaves to cherish her memory her children and their spouses, Jayne and Gary Vander Lee of Hartley, Iowa, Jim and Jayne Korver of Sheldon and John and Connie Korver of Moville, Iowa; seven grandchildren, Matthew (Kendra) Vander Lee and Jennifer Vander Lee, Jett and Jake Korver, Samantha, Tori and Miley Korver; great granddaughter, Kylah Ruth; brother, Dave and Gladys Vander Berg of Sioux Center, Iowa; sister-in-law, Marjorie Vander Berg of Battle Lake, Minnesota; also a host of other relatives and friends.
Ruth was preceded in death by her parents; husband, Dr. Arian, two brothers, Dr. James Bud Vander Berg and Dr. Elmer and Marjorie Vander Berg; and two nieces.
To order memorial trees or send flowers to the family in memory of Ruth Korver, please visit our flower store.