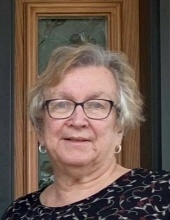 Sharon K. Wills
Sheldon, Iowa
Sharon K. Wills, age 74, of Sheldon, Iowa who passed away on Saturday, October 10, 2020 at Sanford USD Medical Center in Sioux Falls, South Dakota. Her funeral will be held at 2:30 P.M. on Wednesday, October 14, 2020 at St. Paul Lutheran Church in Sheldon, Iowa with Rev. Daniel Baker ~ officiating.
Burial will be at St. Paul Lutheran Cemetery in Sheldon.
Visitation without family present will be from 3 – 7 P.M. on Tuesday, October 13, 2020 at Vander Ploeg Funeral Home in Sheldon.
Masks will be required at the church and social distancing guidelines will be followed.
Arrangements are under the care of the Vander Ploeg Funeral Home – Sheldon.
Online condolences may be made to the Family at www.vanderploegfunerals.com


IN MEMORY OF
SHARON K. WILLS

CONGREGATIONAL HYMNS
“What A Friend We Have In Jesus”
“I Was There To Hear Your Borning Cry”
“Amazing Grace”
Pianist: Arlyce Oosterhuis


Sharon Kay Wills the daughter of Peter and Jennie (Janssen) Vogel was born September 3, 1946, in rural Primghar, Iowa. She received her education in Sheldon graduating from Sheldon High School in 1965. On March 21, 1969, she was united in marriage to Lyle B. Wills in Sheldon, Iowa. After their marriage, the couple settled in Sheldon. Sharon was a stay at home mom until her children were old enough and then she became a home daycare provider. Sharon became like a second grandma to the many children she cared for. She continued providing daycare for many years, eventually caring for own grandchildren until her retirement. Her husband Lyle passed away on October 19, 2007 in Sheldon. Sharon remained in her home with her dog Phoebe as her close companion. Sharon passed away on Saturday, October 10, 2020 at the Sanford Medical Center in Sioux Falls, South Dakota reaching the age of 74 years, one month and seven days.
She was a member of St. Paul Lutheran Church in Sheldon where she was active. She enjoyed times with her family, ceramics, reading, shopping, and coffee with her friends.
Sharon is survived by her two daughters, Stacey (David) Bonello of Ames, Iowa and Krista (Mike) Robinson of Hospers, Iowa; two grandchildren, Kiley and Mason Parks of Hospers, Iowa; brother-in-law and his wife, Lorn and Joan Wills of Sanborn, Iowa; three sisters-in-law, Dorothy Schilling of Westminster, Colorado; Frances Wills and Gloria Wills of Sibley, Iowa, brother-in-law, Alvin Jurrens of Sibley, Iowa, and also many nieces, nephews and friends.
She was preceded in death by her husband, Lyle and her parents, Peter and Jennie.
To order memorial trees or send flowers to the family in memory of Sharon K. Wills, please visit our flower store.