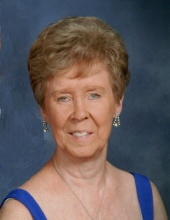 After today’s graveside service, relatives and friends are invited to join the family at the
Primghar Community Building.

Sharon Catherine “Kay” Richter was born on July 26, 1946 in Spirit Lake, Iowa to Donald and Dorothy (Baschke) Richter. Sharon spent her school years in Milford where she graduated from Milford Community High School in 1964. Taking several secretarial classes in high school, Sharon earned awards in typing and bookkeeping. She also enjoyed drill team, chorus, and library club and was an assistant librarian.
On February 2, 1980, Sharon was united in marriage to Raymond J. Shea at St. Joseph’s Catholic Church in Milford. To this union two daughters were born, Shelly Kay on April 27, 1980 and Sheila Rae on May 31, 1981. They made their home in Primghar.
Sharon was 1st deputy auditor at the Dickinson County Courthouse for 15 years. She later managed Kum & Go in Primghar for 7 years where she received a 5-year sales and service award. Sharon went on to work at the O’Brien County Treasurer’s office in Primghar until she retired in 2013.
As a longtime member of St. Anthony’s Catholic Church, Sharon served as Eucharistic Minister and was a member of the Ladies Guild and helped head funeral luncheons. In her free time Sharon loved to roller skate and would often tell you a story of great times she had at the Majestic Roller Rink and Roof Garden in Arnolds Park. She also enjoyed dancing, playing piano, gardening and fishing. Above all, Sharon loved spending time with her family. Her husband, daughter Shelly and three special granddaughters meant the world to her.
Sharon lived at home until health issues required care at Accura Healthcare in Cherokee. Sharon was called home on March 1, 2020 reaching the age of 73 months, 7 months and 5 days.
Left to cherish Sharon’s memory are her husband of 40 years, Raymond, daughter, Shelly and granddaughters, Shayna, Shaylee and Keeley all of Spirit Lake, Iowa; sister, Shirley Puthoff of Sioux Falls and her family; mother-in-law, Ann Shea of Primghar along with the very large extended Shea family and friends.
Sharon was preceded in death by her parents, daughter, Sheila, father-in-law, Donald Shea and brother-in-law, Dwight Boates.
To order memorial trees or send flowers to the family in memory of Sharon Shea, please visit our flower store.