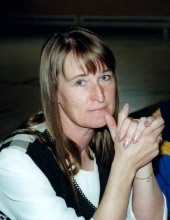 After today’s service, relatives and friends are invited
To join the family at Zion Lutheran Church for fellowship.

Shelley Lyne Igou, the daughter of Vernon and Clara (Rohrs) Jones was born on August 31, 1956 in Paullina, Iowa. She was both baptized and confirmed at Zion Lutheran Church in Paullina. She attended school at Zion St. John and Paullina High School, she later received her GED. She began working at K-Products in 1976 until 2001 when medical issue forced her to retire. She was married in 1983 and made her home in rural Paullina where she enjoyed her horses and other farm animals with her children. In 2001 she moved into her mother’s house and began her retirement. Over the years she had many health issues. On Tuesday, December 24, 2019 Shelley passed away at Orange City Area Health reaching the age of 63 years, 3 months and 23 days.
Shelley’s greatest pride was her grandbabies, Brayden, Devin, Kylan and Derek. Nothing else mattered as long as they were near. They spent their time together fishing at Paullina Lake, swimming, baseball games, fixing the boys bikes and just being with them. Her health was declining but her “boys” always kept a smile on her face. And nothing else mattered to the “boys”, just their gramma.
Shelley is survived by her children, Joe (Jennifer) Jones of Cherokee, Iowa, Jeni Jones (Josh Mahler) of Sutherland, Iowa, David Igou of Paullina and Chuck (Kelsey) Igou of Terril, Iowa; four grandsons, Brayden & Kylan Mahler and Devin & Derek Igou; siblings, Dick Jones of Paullina, Elona Fransen of Minnesota, Vickie Rausch of Calumet and Charlotte (LeRoy) Schmidt of Cherokee.
Shelley was preceded in death by her parents, Vern & Clara; sisters, Dorothy and Karen; brother, Nip and niece Ronda Van Beek.
To order memorial trees or send flowers to the family in memory of Shelley L. Igou, please visit our flower store.