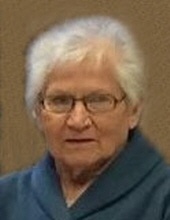 Services for Shirley A. Runge, age 83, of Cherokee who passed away on Thursday, April 14, 2022, at Careage Hills Nursing Home. Her funeral service will be 10:30 A.M. Saturday, April 23, 2022, at the Eldridge Family Funeral Home in Paullina with Pastor Marj Feltman ~ officiating.

Burial will be held at Liberty Township Cemetery in Calumet.

Shirley Ann Runge, the daughter of Fritz and Ella (Puhrmann) Runge, was born February 17, 1939, on a farm outside of Larrabee in Cherokee County, Iowa. She was the fifth child of 8 brothers and sisters. She grew up on a farm around the Larrabee and Calumet areas. Shirley graduated from Larrabee High School in 1956. She then went on to attend the Ellis School of Beauty in Sioux City and graduated from there in August 1957. Shirley then went on a long career of fixing hair for many people. She spent her first 20 years working at Madelines and then she moved to Fashionette, both located in Cherokee. Shirley eventually went into business where she co-owned her own shop with her good friend Julia Fangman, called Fantasy Hair & Salon in Cherokee. Shirley later owned her own shop called Heads North, also in Cherokee. She retired from cutting hair in 2001 and spent her later years working for Perkins Stationary one day a week for 7-8 years.

Amongst all of her work and life, Shirley spent most of her time competing in her lifelong hobby of bowling where she was able to see much of the country and become a great bowler, accumulating many records and trophies. Along the way Shirley made countless friends while working and bowling. She lived most of her life in Cherokee where she resided in her famous A-Frame house.

To order memorial trees or send flowers to the family in memory of Shirley A. Runge, please visit our flower store.