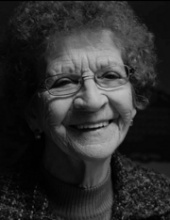 Shirley A. Letner
Sheldon, Iowa
Shirley Ann Letner (nee Groen), age 91, of Sheldon, Iowa, passed away on Wednesday, February 3, 2021 at her home in Sheldon with her loving family at her bedside. There are no services at this time; a Celebration of Life will be at a later date.
Arrangements are under the care of the Andringa Funeral Home – Sheldon.

Shirley Ann Letner (nee Groen), age 91, of Sheldon, Iowa, passed away on Wednesday, February 3, 2021 at her home in Sheldon with her loving family at her bedside. There are no services at this time; a Celebration of Life will be at a later date.
Shirley was born on October 7, 1929 to John and Jennie Groen on the family farm four miles southwest of Ashton. Shirley was the 10th child of a family of 13 children. Shirley attended CS “Gilman Township #9” through 8th grade. Shirley was only one of three children from her family to attend secondary school and graduated in 1947 from Ashton High School. Shirley attended the Ashton Presbyterian Church with her family and enjoyed singing at the services.
After high school, Shirley rode the passenger train to LeMars where she attended Westmar College for a semester. Homesickness brought her back and she enrolled in the Sheldon Junior College. She earned her teaching degree there and her first teaching job was in a country school northeast of Matlock. She also waitressed at the L’Trio and worked at Swansons in Sheldon. One day having lunch at the bowling alley she met a handsome young man new to the area and eventually married Claude C. Letner on February 10, 1951. The couple eventually had five children. Family camping trips, building a new house, and enjoying life in Sheldon were special memories.
As the family grew older Shirley worked part-time. She became a CNA at the hospital and nursing home in Sheldon, earned her LPN degree in 1976, and a degree as a RN from St. Joseph’s in Sioux City in 1986. Shirley joined the SCAT team, organized Citizens CPR, and was a CPR instructor.
Shirley and family joined the United Methodist Church in Sheldon in 1951 until the present. Shirley served as parish nurse for ten years at the UMC. She also helped with many, many suppers at the church, taught Sunday school, served on the Mission Committee and organized church members to serve at The Banquet in Sioux Falls and The Gospel Mission in Sioux City. Mission work provided opportunities to serve on a national and global level as well. Nigeria, Haiti, Mexico City, Honduras, Mississippi, Appalachia, Alaska, Antigua, Puerto Rico were some of the places Shirley traveled to.
Serving locally was important to Shirley as well. In addition to SCAT at some point Shirley served as a Cub Scout/Boy Scout leader, a Girl Scout leader, Red Cross volunteer, joined and supported the Trails Committee and probably others. Shirley worked at the Sheldon Hospital and Nursing Home, Home Health/Hospice and later in life private duty nursing. She enjoyed music, walking, gardening, camping, and serving others.
Shirley is survived by her children: Tim Letner of Epworth, Iowa, Lisa and Tom Youngers of rural Sheldon, Lori and Keith Anderson of Orange City, Iowa, and Richard and Joy Letner of Sheldon. Shirley also impacted the lives of her beloved 13 grandchildren and 18 great grandchildren. She was predeceased by her husband in 1991, parents and in laws, 5 sisters and 7 brothers and beloved son, Claude Jr., in 1975.
Shirley’s last act of service was donating her body to science.
To order memorial trees or send flowers to the family in memory of Shirley Ann Letner, please visit our flower store.