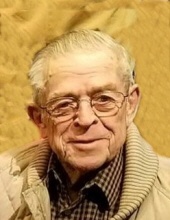 Visitation
with family present will be
after 9 A.M. until service time
at the church
on Tuesday, February 18, 2020
.
MUSIC
C.D. “When I Get to Where I’m Going” by Brad Paisley
C.D. “Angles Among Us” by Alabama
C. D. “One More Day “ by Diamond Rio
Organist: LaNan Eldridge

Arrangements under the care of the
Eldridge Family Funeral Home; Primghar, Iowa
SIDNEY “SID” E. GUSTAFSON
Sidney Ernest Gustafson the son of Albin and Ruby (Zenor) Gustafson was born September 24, 1931 in Primghar, Iowa. He received his education and graduated from Primghar High School. After high school he enlisted in the Army. After his discharge he returned to Primghar and worked in construction. On June 7, 1959, he was united in marriage to Martha Straub at the Zion Lutheran Church in Paullina. After their marriage the couple settled in Primghar, where Sid began employment with the Primghar Post Office working at the counter helping customers. Sid began working for Life Investors a company he received many awards from. In the years to come he purchased Tjossem Insurance Company in Paullina and Klink Insurance Company in Primghar and then both companies were named Gustafson Insurance. He operated them many years before selling them to Paul Struve. In his retirement he was still active in the insurance business until ill health forced his total retirement. Sid passed away on Friday, February 14, 2020 at his home in Primghar reaching the age of 88 years, four months and 20 days.
He was a member of the United Church of Primghar and Chateau-Thierry Post of the American Legion of Primghar. He enjoyed hunting, golf and especially fishing and spending time at the lake. Sitting on his dock watching the boats being unloaded and loaded across from his house was a favorite past time.
Sid leaves to cherish his memory his wife of over 60 years, Martha Gustafson of Primghar, Iowa; son, Randy Gustafson of Primghar, Iowa; two grandsons, Kyle Verner of Spencer, Iowa and Keaton Verner of Milford, Iowa; also other relatives and many friends.
He was preceded in death by his son, Scott on June 23, 1980, parents, Albin and Ruby and one, brother James “Bud” Gustafson.
To order memorial trees or send flowers to the family in memory of Sid Gustafson, please visit our flower store.