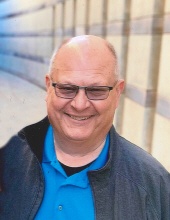 Steven G. Holles
Sheldon, Iowa
Steven G. Holles, age 61, of Sheldon who passed away on Thursday, March 18, 2021 at Ava’s Hospice House in Sioux Falls, South Dakota. His funeral service will be held at 1:30 P.M. on Saturday, March 27, 2021 at the Sheldon United Methodist Church with Pastor Kevin Gingerich ~ officiating.
Burial will be at St. Joseph’s Catholic Cemetery in Granville.
Visitation will be after 3 P.M. on Friday, March 26, 2021 with family present from 5 – 7 P.M. at the Vander Ploeg Funeral Home in Sheldon.
The Service will be live-streamed on Sheldon United Methodist Church Facebook Page

Masks are recommended for the visitation and church service.
Online condolences may be sent to www.vanderploegfunerals.com

Steven Gerald Holles, the son of Robert and Carol Holles, was born on July 5, 1959 in Des Moines, Iowa. He was raised in Sheldon, Iowa. Steve attended St. Patrick’s Catholic School and graduated from Sheldon High School in 1977. After high school, Steve worked at Aalf’s Manufacturing. During this time, Steve met and then married Joan (Lundt) Holles on July 20, 1985. Steve and Joan moved multiple times early on in their marriage, but Sheldon was their forever home. Steve worked various jobs as a manager before working at Sudenga Industries in George, Iowa. He worked at Sudenga Industries for 32 years.
Steve was an active member in the Sheldon community. He was once a member of the Sheldon Community Ambulance Team, Jaycee’s, and Tanner Softball Team. Most recently, he was a member of the Orab Booster Club as well as the United Methodist Men’s Group. Steve enjoyed music a lot. He ran the soundboard for church services as well as the Last Supper Production. Steve worked security for Risefest and loved the concerts. Steve loved sports. He was an official for basketball (25+ years) and volleyball (10 years). Steve also ran the sports clock for the Orab basketball and football games for 31 years. He was the recipient of the 2020 Iowa High School Athletic Directors Association’s Outstanding Service Award. Steve was a big support for his family who participated in RAGBRAI. He drove the support vehicle and would help with bike repairs. Steve was known as “Puff Daddy.” He also enjoyed camping with his family and volunteering at Cutty’s during the summers. During the time Nathan and Janessa attended Baylor University, Steve became one of the biggest Baylor Bear’s fans. Steve and Joan traveled to Waco almost every six weeks to visit Nathan and Janessa. While visiting, Steve would host meals for Nathan and Janessa’s friends, go to new places such as restaurants or coffee shops, bookstores, and especially any Baylor sporting event. Nathan and Janessa were his pride and joy.
Steve was a great son, brother, father and husband. He would do anything for anybody.
Steve passed away on March 18, 2021 reaching the age of 61 years, 8 months and 12 days. Left to cherish his memory are his wife of 35 years, Joan; and their two children, Nathan Holles of Clarkston, Georgia, Janessa Holles and her fiancé, Kyle Kieser both of Waco, Texas. His beloved dogs; Sophie, Winston and Stella; his mother, Carol Holles of Sioux City, Iowa; three sisters, Sue and husband, Jon Bakker of Dows, Iowa, Barb and husband, Mark Loots of Fort Dodge, Iowa, and Kathy George of Sioux City, Iowa. He is survived by sisters-in-law and brothers-in-law, as well as numerous family members and friends.
He was preceded in death by his father, Robert M. Holles, his brother, Keith R. Holles, father-in-law Wilmer Lundt, mother-in-law Joyce Lundt, and sister-in-law Jane Lundt.
To order memorial trees or send flowers to the family in memory of Steven G. Holles, please visit our flower store.