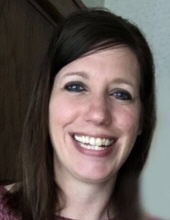 Services for Tammi Bottjen, age 42, of Primghar who passed away on Friday, June 5, 2020 at her residence. Her funeral service will be 10:30 A.M. Thursday, June 18, 2020 at the United Church of Primghar with Rev. Marvin Lindley and Rev. Kevin Gingerich ~ officiating.
Burial will be at Ocheyedan Township Cemetery.
Visitation with family present will be from 5 - 7 P.M. on Wednesday, June 17, 2020 at the Eldridge Family Funeral Home in Primghar.
Social distancing practices will be asked to be followed.

Tamara “Tammi” Renee Bottjen the daughter of Darvin and Mary (Schuck) Rusche was born July 27, 1977 in Sigourney, Iowa. She attended school in Sheldon and graduated from Sheldon High School in 1995. On July 12, 1997, she was united in marriage to Joshua Bottjen at the Archer United Methodist Church in Archer, Iowa. The couple lived in Phoenix, Arizona for several years and to this union four children were born, Haley, Breana, Peter, and David. They later divorced in 2015.
Since 2008, the family has made their home in Primghar. Tammi furthered her education at Northwest Iowa Community College, where she received her registered nursing degree in 2010. She was employed at Mercy One Hospital in Primghar and at the Mercy One Wound Center. In July of 2017, she met the love of her life Bryan Beckman and they spent many happy times together. Tammi passed away at her home on Friday, June 5, 2020 reaching the age of 42 years, 10 months, and 8 days.
She enjoyed going to her children’s sporting events, playing golf, and shopping.
Tammi leaves to cherish her memory her four children, Haley Bottjen and fiancé Justin Chesmore of Wapello, Iowa; Breana, Peter, and David Bottjen all at home in Primghar; her parents, Darvin and Mary Rusche of Archer, Iowa; a sister, Becky (Mike) McCuddin, a brother, Matt Rusche all of Sheldon, Iowa; paternal grandmother, Gerry Rusche of Sibley, Iowa; special friend, Bryan Beckman and his family, Carter, Haylee, and Elise of Larchwood; also other family members and many friends.
She was preceded in death by a brother, Daniel; paternal grandfather, Delbert Rusche; and maternal grandparents, Paul and Lena Schuck.
Tammi cared for others in her life and in her death by being an Organ Donor.
To order memorial trees or send flowers to the family in memory of Tammi (Rusche) Bottjen, please visit our flower store.