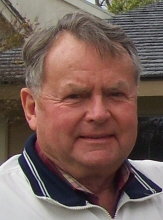 Tenas DeJong, age 93, of Ruthven, Iowa, formerly of Boyden, Iowa, passed away on Saturday, February 9, 2019 at Ruthven Community Care Center in Ruthven. Funeral Services will be Saturday, February 16, 2019 at 1:00 P.M. at the Andringa Funeral Home Sheldon Funeral Service in Sheldon. Chaplain Fred Dykhuizen officiating. Burial to follow at Sheridan Township Cemetery in Boyden, Iowa. Visitation will be Saturday, February 16, from 11:00 A.M. to 12:45 P.M. prior to the Funeral Service at the Andringa Funeral Home Sheldon Funeral Home in Sheldon. The last of six children, Tenas was born to Trintje and Sam Veninga in Doon, Iowa. After his mother's death at childbirth, he was raised and later adopted by family friends, Jennie and Fred De Jong. He spent his youth on the family farm in Carnes and his teenage years in Orange City where he attended Orange City Christian School. At seventeen, before completing high school and with the permission of his father, he volunteered for World War II Naval Service. Declined because he was color blind, he was then inducted into the Army Air Corps in December of 1943. He served in the Signal Corps in California and then as a radar instructor at Drew Field, Florida, for B-17 bombers headed for the Pacific Theatre. Tenas was honorably discharged as a sergeant of the 462nd Army Air Force Unit 1946 and then enlisted in the Air Force Reserves until 1952. While at home on military leave, Tenas met the love of his life, Joanne, at Arnold's Park, Lake Okoboji. They were married on July 5, 1947 and were blessed with four children. Tenas graduated from Iowa State College in Ames, Iowa with a B.S. degree in Forestry in 1952. He worked in the lumber business for over thirty-five years, his career spanning lumber salesman in the Midwest to plant manager for cabinet manufacturing in La Mirada, California and Youngstown, Ohio. He made friends easily and was an honest and forthright man. In his business world he was known as Mr. "D". Upon retirement, he enjoyed his grandchildren, riding his bike with his wife, Joanne, growing and eating his own tomatoes. He liked woodworking and always had a passion for cars. After his sons bought a farm in Iowa, there was nothing he liked better than to help unload the wagons at harvest time. He was a staunch Republican. In his later years he liked to listen to conservative talk radio and FOX TV News, often simultaneously. Tenas was solid in his faith with the Lord. He was a long-time member of the First United Presbyterian Church. After his move to Spencer, Iowa he found inspiration listening to Rev. Schuller's message on the "Hour of Power". He enjoyed Christian music by the Gaither Brothers and the Mormon Tabernacle Choir. Tenas is preceded in death by Joanne, his wife of fifty-eight years; parents, Trintje and Sam Veninga and siblings, John, Rich, Bill, Louie and Martha; adoptive parents, Jennie and Fred De Jong and siblings, Jake, Geert, Pete, and Sue. He is survived by his children: David and Paul De Jong of Dickens, IA; Karen (Frank) Allen of Mission Viejo, CA; Linda Cicconi of Noblesville, IN; as well as five grandchildren, eleven great-grandchildren, nieces and nephews. Tenas passed into the Lord's hands at Ruthven Community Care Center in Ruthven, Iowa. His interment will be in Boyden, Iowa, next to his wife, Joanne. In Loving Memory Of Tenas De Jong Born: November 22, 1925 Passed Away: February 9, 2019 Age: 93 years, 2 months and 18 days FUNERAL SERVICE Saturday, February 16, 2019 at 1:00 P.M. Andringa Funeral Home Sheldon Funeral Service OFFICIATING Chaplain Fred Dykhuizen MUSIC Keyboardist: Ingetta Tutje Congregational Songs "How Great Thou Art" "Amazing Grace" "Faith of our Fathers" CASKET BEARERS Family INTERMENT Sheridan Township Cemetery, Boyden, Iowa MILITARY HONORS American Legion and V.F.W. Boyden, Iowa ARRANGEMENTS BY Andringa Funeral Home Sheldon Funeral Service Sheldon, Iowa Larry R. Andringa, Funeral Director

To order memorial trees or send flowers to the family in memory of Tenas DeJong, please visit our flower store.