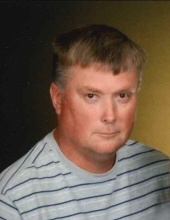 IN LOVING MEMORY OF
THAD A. RASMUSSEN

MUSIC
C. D. “Lord I Need You” by Matt Maher
C.D. “There Was Jesus”
by Zach Williams & Dolly Parton
CONGREGATIONAL HYMNS
“Amazing Grace”
“What a Friend We Have In Jesus”
Organist: Jolene Erickson

Arrangements under the care of the
Eldridge Family Funeral Home; Paullina, Iowa
Thad Allen Rasmussen, 53, of Paullina, IA, passed away Friday, March 12, 2021 at the Orange City Medical Center from cardiac arrest. Thad was born on September 19, 1967 in LeMars, Iowa to Gary “Boze” and Linda (Sanow) Rasmussen. He was baptized on November 5, 1967 at Faith Lutheran Church in Marcus, Iowa and was confirmed there on April 4, 1982. He grew up on a farm southwest of Paullina and graduated from Paullina High School in 1986.
Thad met Tracy Oeffner on a blind date in 1991 and on July 9, 1993 they were united in marriage at Bethel Lutheran Church in Sutherland, Iowa. Thad and Tracy made their first home in Alton, Iowa for a couple of years while Tracy finished college at Northwestern. Then, they lived on the old Rasmussen family farm northeast of Marcus for a year and in 1996 moved to the acreage southwest of Paullina where they were currently raising their three children.
Besides farming, Thad worked at various places over the years including his mom and dad’s bar, The Hawkeye, in Marcus, HyVee Warehouse in Cherokee, K-Products in Orange City, Neal Chase Lumber in Primghar, Downtown Hardware in Sheldon, Bomgaars in Cherokee, and most recently, Walmart in Sioux Center.
Thad was happiest spending time at home with his family, working on the farm, and visiting with people. He loved to tell stories and often had a grin on his face. In his spare time, he enjoyed watching old Westerns, listening to classic rock, collecting Coca-Cola memorabilia, and in his younger years, bowling. His three children were his pride and joy.
Thad is survived by his wife, Tracy, kids, Bryce, Beau, and BreLee of Paullina, Iowa, siblings Robin Harms of Lake Jackson, Texas, Zach (Jessica) Rasmussen of Denver, Colorado, Mindy (Mike) Rohlfsen of LeMars, Iowa, Josh (Michelle) Rasmussen of Eldridge, Iowa, father and mother-in-law Bob and Jan Oeffner of Paullina, brother-in-law Mike Oeffner of Harlan, Iowa, and many extended family members and friends. He will be deeply missed by his family and friends.
Thad was preceded in death by his parents, Gary “Boze” and Linda Rasmussen, brother, Terry Rasmussen, and grandparents, Harry and Erna Rasmussen and Wayne and Carrie Sanow.
To order memorial trees or send flowers to the family in memory of Thad A. Rasmussen, please visit our flower store.