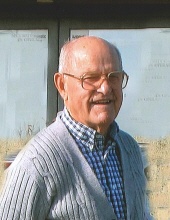 Thomas “Tom” Merry
Primghar, Iowa
Thomas “Tom” Merry, age 88, of Primghar, Iowa who passed away on Thursday, April 5, 2018 at his residence in Primghar. His Memorial Services will be 1:00 P.M. Friday, April 20, 2018 at the United Church of Primghar in Primghar, Iowa with Pastor Mike Cooper ~ officiating.
Burial will be prior to the service in the Pleasant Hill Cemetery in Primghar.
Visitation will follow the service at the church.
The Eldridge Family Funeral Home of Primghar is in charge of arrangements.
Thomas R. Merry
Thomas R. Merry, 88, passed away at his home in Primghar, Iowa on Thursday, April 5, 2018.
Tom was born on July 4, 1929 in Primghar, Iowa to Jake and Agnes (Smith) Merry. He was a graduate of Primghar High School. After attending Mankato Commercial College and serving his country in the Navy during the Korean War from July of 1948 until his discharge in June of 1952. Tom graduated from Northern Oklahoma A&M and began a successful career as a financial controller and manufacturing manager until he happily retired at the age of 52.
Tom married Phyllis Chambers on July 14, 1951 at the Little Brown Church in Nashua, Iowa. Together they followed his career path through California, Missouri, Ohio and Oklahoma until they eventually returned to retire in Primghar
He remained an active member of the Primghar Golf and Country Club and thoroughly enjoyed his retirement years. Since his death, virtually everyone has mentioned what a fine and kind man he was and that he never had a cross or negative word to say about anyone.
Tom was preceded in death by his wife, Phyllis on June 16, 2008, his parents, Jake and Agnes Merry, a sister, Shirley VandenBrink and a brother, John (Jack) Merry.
He is survived by his four children, Becky Arterbury and her husband, Brandon; Kathi Egan and her husband, David; Thomas W. Merry and his wife, Wanda and Michael Merry and his wife, Tina. He is also survived by seventeen grandchildren and six great grandchildren with two additional pending. Tom was especially proud of his family and was beloved by them all. Also surviving are brother’s Jim Merry and Ken Merry and sister, Pat Uittenbogaard also other relatives and many friends.
In Lieu of flowers, the family asks that you make a donation to the charity of your choice or perform a random act of kindness.
To order memorial trees or send flowers to the family in memory of Thomas R. Merry, please visit our flower store.