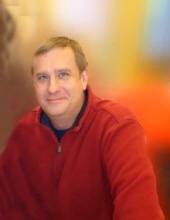 Todd M. Brookfield
Hartley, Iowa
Services for Todd M. Brookfield, age 51, of Hartley who passed away on Sunday, July 3, 2022, at Sanford USD Medical Center in Sioux Falls, South Dakota. A private graveside service will be held at Prairie View Cemetery in Paullina.
Arrangements are under the care of the Eldridge Family Funeral Home in Paullina.

Todd Matthew Brookfield born on February 1, 1971, to Lorin and Ragean Brookfield, passed away Sunday July 3rd in Sanford hospital Sioux Falls South Dakota surrounded by his family. Over his 51 years of life, he built his home in Hartley Iowa. From working at the elevator for many years along with a few side jobs he enjoyed, he also held the position of assistant fire chief for the fire department. In his free time, he enjoyed golf, all things sports - a HUGE Hawkeye and Charger fan -, along with watching his idol Michael Jordan, watching jeopardy, listening to music, spending time with his family and making sure everyone around him was laughing at his goofy jokes. Todd was a great father, son, and friend to have around. He was a very strong and gentle man who will be missed by many. There was never a dull moment with him and he was the kind of man you could trust and confide in.

To order memorial trees or send flowers to the family in memory of Todd M. Brookfield, please visit our flower store.