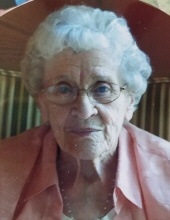 Services for Velma L. Rohwer, age 99, of Crosby, Minnesota who passed away on Friday, May 1, 2020 at Cuyuna Care Center in Crosby, Minnesota. A private family graveside will be held on Saturday, May 9, 2020 at Waterman Cemetery in Sutherland, Iowa.
There will be no visitation.
Arrangements are under the care of the Eldridge Family Funeral Home in Paullina.


Velma L. Rohwer, the daughter of Fred and Minnie Westphal, grew up in Moneta, Iowa where she received her education through high school.

Velma married Russell Rohwer on July 11, 1940 in Calumet, Iowa. They owned a farm in Sutherland for many years then moved to Okabena, Minnesota where they rented land and farmed for six years before returning to their farm in Sutherland. In 1966 they sold the farm and moved to Minneapolis where they worked in apartment management with son Randy until retiring in 1986 and moving to Worthington, Minnesota. Velma lived in Cherokee, Iowa after Russell’s death.

Recently Velma had been living at the Heartwood Senior Living before moving to Cuyuna Care Center in Crosby, Minnesota where she passed away on May 1, 2020. She was preceded in death by her husband of 63 years, Russell, her parents, 11 brothers and sisters.