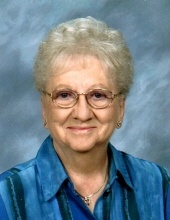 PRELUDE
“He Touched Me”
MUSIC
“Precious Lord, Take My Hand”
Sung by: Fred Schuknecht
Accompanied by: LaNan Eldridge
CONGREGATIONAL HYMNS
“Just As I Am”
“My Hope Is Built On Nothing Less”
“God Be With You Till We Meet Again”
Organist: Joyce Hibbing

Verla J. Hibbing was born on December 12, 1930 in O’Brien County near Germantown, the daughter of Fred H. and Amanda (Pauling) Strampe. She was baptized at St. John’s on January 1, 1931 and confirmed in 1943. She attended St. John’s Lutheran School and graduated from Paullina High School with the Class of 1947.
On May 17, 1951, she was united in marriage to Clarence A. Hibbing at St. John’s by Pastor Eschenbacher. Two sons were born to this union. The first years of their marriage were spent living in Arlington, VA while Clarence served his tour in the U.S. Army.
In 1953, they returned to Paullina and began farming north of Paullina. She was a homemaker as well as helping with the farming operation and the Pioneer Seed business. In 1981 she moved into her present home.
In her early years, she took music lessons and at the age of 12, began playing the organ at St. John’s. She continued serving as an organist here at home as well as in AZ. She played for many weddings and funerals, as well as social gatherings in the surrounding area. She enjoyed playing with a dance band for several years, as well as doing sing-a-longs. She served as a choir member over the years at St. John’s, Zion and Valle Del Oro in AZ. Anything involving music was a joy for her. Besides her love of music, she enjoyed her family, hand work, fishing at Ottertail, MN, traveling and wintering in AZ.
She is survived by two sons, Mark (Jonie) Hibbing and David (Janelle) Hibbing; six grandchildren, Todd (Deidra) Hibbing of Grimes, Kelly (Jeremy) Buenger of Quimby, Adam (Anna) Hibbing of Paullina, Brice (Jacey) Hibbing of Polk City, Grant Hibbing of Paullina and Brooke Hibbing (Tom Barber) of Spencer; seven great-grandchildren, Madelyn & Kaitlyn Buenger, Quincy & Claire Hibbing, Owen Hibbing, Theo Barber, and Josie Hibbing; two nieces, Judy (Ron) Waggoner and Jeanette (Doyle) Wissink.
She was preceded in death by her husband in 2001, her parents, her brother and sister-in-law, Orlynn & Luella Strampe, brother and sister-in-law, Wilbur and Gladys Thoms, brother and sister-in-law, Earl and Nancy Hibbing.
To order memorial trees or send flowers to the family in memory of Verla J. Hibbing, please visit our flower store.