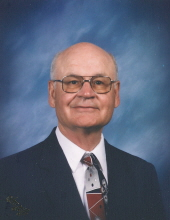 Visitation with family present will be after 10 A.M. until service time at the church.

The service will be live-streamed on the United Church of Primghar's Facebook Page.
Arrangements are under the care of the Eldridge Family Funeral Home in Primghar.

After today’s service relatives and friends
are invited to join the family in the
fellowship hall of the church.

Vernon John Wittrock was born October 4, 1928, in an old farmhouse that did not have running water or electricity. He was the 7th child born to Hugo and Clara (Kock) Wittrock. Vern went to country school through the 8th grade as the only one in his class. He was baptized and confirmed in St. John’s Evangelical Church (now the Primghar Library). He attended Primghar High School graduating in 1947. After high school he took a job working for 2 local farmers for $ 125 a month as a live-in hired man. He then was hired as herd manager for Farmer’s Hybrids at Cherokee, Iowa. In 1950, he was drafted into the United States Army for two years serving about one year in Korea with the 2nd Infantry Division. He came home and farmed with his brother, Ervin. He met his future bride in the fall of 1954 and was married to Ruth Mahany on June 5, 1955 at Grace United Methodist Church in Sioux City, Iowa. He farmed for about five years and then took a job as field man for the Everly Co-op Elevator in 1960. In 1962, he was hired as assistant manager of the Superior Iowa Co-op. In 1973, he became manager of the Ocheyedan Iowa Co-op where he worked for eleven years. He then worked for the Bank of Cooperatives and Land O’Lakes as an interim manager for elevators that were having financial difficulties. After nine interim jobs he went to manage full time for the Northwest Iowa Co-op at Ashton and Allendorf. After Vern retired on January 1, 1990, he enjoyed traveling, riding Amtrak and golfing. Ruth and Vern were blessed with four children - Ann (Bruce) Storm, Quentin (Cindy) Wittrock, Joy (David) Weingartner, and Eric (Kristi) Wittrock and now have 9 grandchildren and two great grandchildren. He is also survived by one brother, Walter (Dick) and Leona Wittrock, one sister, Marge (Leon) Hunt and other relatives and friends.
He was preceded in death by his parents, brothers, Donald (Arlene) Wittrock, Ervin Wittrock, and sisters, Wilma (Wessel) Rippentrop, Helen (John) Hansen, Arlene (Everett) Brown.
Vern was proud of his accomplishments in life, putting 4 children through college, building 3 new houses, and buying 21 new cars, never signing a mortgage.
To order memorial trees or send flowers to the family in memory of Vernon J. Wittrock, please visit our flower store.