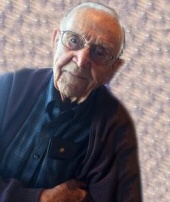 With the family will be one hour prior to the service

Tuesday at the Bethel Lutheran Church in Sutherland, Iowa

How Great Thou Art

Vernon Kruse, the son of Henry and Frieda Kruse, was born May 2, 1919 at a farm home near Calumet, Iowa. He was raised on the family farm and attended country school between Calumet and Sutherland. He graduated from Calumet High School in 1936 and later attended Buena Vista College in Storm Lake for a year and a half. He enlisted during World War II serving in the Air Force for three years. He was stationed in Texas, Mississippi and California working as a co-pilot on B-24s. He was discharged with a rank of 2nd Lieutenant in November of 1945. On February 17, 1943, he was united in marriage to Evelyn Steinbeck in Hartley, Iowa. After his return from the service, the couple farmed for forty years until his retirement in 1986. The couple continued to live on the family farm. Evelyn preceded him in death on August 8, 2014. Vernon remained on the farm until moving to the Prairie View Retirement home in Sanborn October of 2015. Vernon passed away at Prairie View on Friday, September 29, 2017 reaching the age of 98 years, 4 months and 27 days.

He was baptized on June 4, 1922 and later confirmed on April 14, 1946. Vernon was a long-time member of Bethel Lutheran Church where he served as Elder and President of Concordia League. He was also a member of the Sutherland American Legion. He enjoyed spending time with his family, traveling, fishing, bowling and golf.

He was preceded in death by wife, Evelyn, his parents, brother, Lester and sister, Evelyn Wallin.

-Barbara W. Weber
To order memorial trees or send flowers to the family in memory of Vernon Kruse, please visit our flower store.