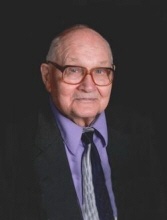 Arrangements under the care of the
Vander Ploeg Funeral Home, Sheldon, Iowa

VICTOR LEE SCHOLTEN
Victor Lee Scholten of Sheldon, IA passed on to his eternal, heavenly home on Sunday, February 19 at 2:30pm at Sanford Sheldon Medical Center in Sheldon, Iowa surrounded by loved ones.
Victor Lee Scholten, son of John and Mary (Black) Scholten, was born October 16, 1922 at home in Boyden, IA. He lived in Boyden until 1934 when the family moved to a farm three miles east of Sheldon, IA on Highway 18. In 1934 he went to country school before going to Sheldon Community High School where he graduated in 1941. He was in the state guard in 1942 at Camp Dodge, IA for a year. From 1942-1945 during World War II he was in the Army Air Force. Vic flew 40 bombing missions over Europe from Italy and England in a B-24-J Liberator Bomber as an Engineer and Gunner. He was a member of the 98th Bomb Group in Italy and the 458th Bomb group in Norwich, England.
On May 15, 1943, he married Elsie Schmidt of Sheldon, IA at Kessler Field, Biloxi, Mississippi. At the end of WW II, they returned to Sheldon and farmed for 25 years on the Scholten farm. Vic and Elsie were married for 52 years when Elsie died in 1995. Vic measured land for the Government Program for several years in Floyd township in OBrien County. During this time, he taught tractor safety courses to youth in the area. Vic was also a rural telephone repair man for several years. Vic served on many committees including the Soil Conservation Board of OBrien County.
Vic retired from farming and became an employee for the Sheldon Public Schools as a custodian in the high school in 1970. Then in 1972 he became the schools Transportation Supervisor. Vic oversaw 14 bus routes and the maintenance of about 24 buses. He retired in 1987 at age 65.
Since 1945, Vic belonged to the American Legion McGlothen-Cowie Post 145 for 72 years as a lifetime member. He was a past Commander of the American Legion, the Sargent at Arms, and an Adjutant of the Legion. He also belonged to the 40th & 8th Voiture National Veteran of Foreign Wars. Vic attended the 98th Bomb Group reunions almost every year since they started. Other organizations he belonged to are the WW II Museum in New Orleans, the Sons of the American Revolution, the 98th Bomb Group Museum, the Air Force Museum in Dayton, Ohio, the Memorial Air Force Arlington National, and the Great Britain Air Force Museum. These memberships indicate his great love of country and his patriotism.
Locally, Vic worked on the Sheldon Avenue of Flags, the Museum Board and the Historical Society for several years. He was a part of the planning committee for the Veterans Memorial in the Sheldon City Park. He joined Kiwanis when he retired.
Vic has been a member of St. Paul Lutheran Church of Sheldon since the 1940s. At the church Vic has served on church council and other committees. His faith was an integral part of his life and he trusted completely in Jesus Christ, his Savior.
Vic married his longtime, family friend Marjorie (Margie) Willms of Sheldon on October 11, 1997 in Rochester, MN. They lived in Sheldon and were married for 14 years until Marge died in 2011.
Vic was preceded in death by: his parents. John and Mary; his wives Elsie and Marge; a brother Gerrit (Gary) Scholten; sisters Arlene (Suzie) Buckner and LaVonne Gloyd; and daughter Kathy Noble.
He is survived by his children: Vic, Jr and Beth (Shipman) Scholten of Rockford, IL; Nancy and Richard Wales of Rochester, MN; step-children: Susan (Willms-Cantine) and Bob Maxson of Lansing, IA; Marilee (Willms-Schmalen) and Lou Benscoter; six grandchildren: Becky Scholten of South Orange, NJ; Kaiti Scholten of Rock Island, IL; and Josiah Scholten of Torrance, CA; TJ Noble of Seattle/Duvall, WA; and Alicia Wales of Duluth, MN and Marissa Wales of Decorah, IA; step-grandchildren: Andrew and Kasey Cantine of Iowa City, IA; Aaron and Jen Cantine of Minneapolis, MN; Annie and Chris Welday-Zimney of Spring, TX; Nick and Jessica Schmalen of Sibley, IA; Mike and Rhea Schmalen of Archer, IA; seven step-great grandchildren and many dedicated, close friends.

TAPS
Day is done, gone the sun
from the lake, from the hill,
from the sky.
All is well, safely rest. God is nigh.
Thanks and praise for our days
neath the sun, neath the stars,
neath the sky.
As we go, this we know. God is nigh.
To order memorial trees or send flowers to the family in memory of Victor 'Vic' L. Scholten, please visit our flower store.