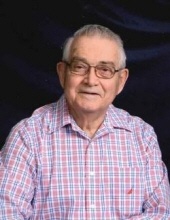 Funeral services for Wally Simm, age 93, of Sanborn, formerly of Paullina who passed away on Tuesday, November 21, 2017. His funeral service will be 2:00 P.M. on Saturday, November 25, 2017 at First Presbyterian Church in Paullina with Rev. Dr. Angel De La Cruz ~ Officiating

Visitation with family present will be from 5 – 7 P.M. on Friday, November 24, 2017 at the Eldridge Family Funeral Home in Paullina.

Wallace Richard Simm, 93, found his way home on Tuesday, November 21, 2017. “Wally” was born August 24, 1924 in Paullina, Iowa son of Richard and Florence (Rohwer) Simm. He grew up on the family farm north of Paullina. He attended country school in Dale Township through 8th grade and attended Paullina Community School where he graduated from high school in 1943. He signed up to join the Army in 1945. After finishing basic training and prior to being shipped to Japan, he came back to Paullina and married his “true love” Betty Carlson on May 14, 1945. They moved to the original Simm homestead in March 1951 where he farmed for 42 years raising hogs, beef cattle, milk cows, sheep, chickens, as well as corn and beans. Their family farm received a Century Farm Award in 1998. At retirement age Wally and Betty moved into Paullina and bought his father’s house where they lived for 24 years.

They enjoyed traveling also during this time, especially in the winter months, and stayed in Arizona and Texas often. They enjoyed their friends in the RV group. Wally and Betty enjoyed visiting many states – as far north as Canada and Alaska, as far south as Texas and Mexico. They went to Germany to visit their son and daughter-in-law while Dick was in the Army. Family vacations were spent mostly in the western states and he did get to see the Pacific Ocean and visited Hawaii twice. Didn’t head east until a family trip in 2004 to Nags Head, North Carolina where he enjoyed seeing the Atlantic Ocean and experienced deep-sea fishing. Oh, yes, he was a fisherman! Spent many years going to Canada, Minnesota and enjoying the nearby lakes in the area. He was a patient man… and enjoyed the quiet. Another interest was hunting… and outdoors man with reverence for the land and its habitat. He was a good farmer. He took care admirably of what he had. He enjoyed outdoor life… would have been a great cowboy. He wore a rancher hat often and loved all TV westerns.

Wally was a faithful member of the Presbyterian Church of Paullina. He served as an elder and deacon. He was active in Farm Bureau, member of Paullina Lions Club and the American Legion. He also served on the board of Paullina Coop Elevator, REC, ASCS and Farmer’s Mutual Insurance.

Wally and Betty have been living at Prairie View Nursing Home at Sanborn, Iowa for the last four years.

Onto his eternal reward…there to greet him are his grandparents, parents, brother, Philip Simm, brother-in-law, Leonard Koch and many fine friends.

He was a man who was contented with his life. And he shared this inspiring presence with his loving family, his friends, his community and his country. Well done…well done.
To order memorial trees or send flowers to the family in memory of Wallace "Wally" R. Simm , please visit our flower store.