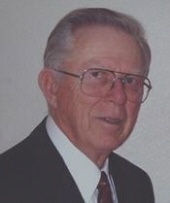 Arrangements under the care of the
Eldridge Family Funeral Home of Primghar.

Walter George Jeffers, the son of Walter Charles and Bertha (Pratt) Jeffers was born May 28, 1926 in Sioux City, Iowa. He received education in Leeds (part of Sioux City) and the family moved to Norfolk, Nebraska where he went to country school and in his freshman year of high school, he was in the same class as Johnny Carson. In 1941, the family moved to a farm near Primghar where Walt finished his education graduating from Primghar High School in 1943. He attended Morningside College before enlisting in the Navy in March of 1944. He was stationed in Minot, North Dakota in the V12 Program, and was discharged in June of 1947. He came back to Iowa and attended Iowa State in Ames later working in Omaha. In 1952, he came back to the family farm and farmed with his dad. On January 23, 1954, he was united in marriage to Patricia Smidt at the Methodist Church in Cherokee, Iowa. After their marriage the couple settled in Primghar before moving to the family farm when his folks retired. Walt farmed for many years and in his retirement years remained on the family farm. He passed away on Sunday, November 17, 2013 at the Baum-Harmon Mercy Hospital in Primghar reaching the age of 87 years, 5 months and 19 days.
He was a member of the United Church of Primghar and was on the building committee of the new United Church and had served as a trustee. He was a member of the Chateau-Thierry Post of the American Legion of Primghar. He enjoyed golfing, reading, bowling and especially the family fishing trips to northern Minnesota for 49 years.
Walt is survived by his wife of 59 years, Pat of Primghar; children, Lynn Jeffers and Duane Weis of Jessup, Iowa; Craig and his wife, Annette Jeffers of Blairsburg, Iowa; Kay and her husband, William Skidmore of Omaha, Nebraska and Diane and her husband, Derwin Van Drie of Sheldon, Iowa; 9 grandchildren, a brother and his wife, Gordon and Sharon Jeffers in Mississippi; brother-in-law, Barry Loughridge in Florida and brother and sister–in-law Dudley and Ann Smidt in Colorado; also other relatives and friends.
He was preceded in death by son, Charles Jeffers; his parents and three sisters, Beverly Rickard, Barbara Davi and Sue Loughridge.
To order memorial trees or send flowers to the family in memory of Walter G. Jeffers, please visit our flower store.