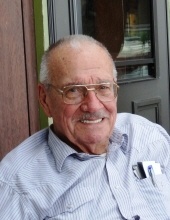 Services for Warren R. Vanden Brink, age 95, of Sheldon who passed away on Tuesday, May 19, 2020 at Community Memorial Health Center in Hartley. There will be no formal services at this time.
Arrangements are under the care of the Andringa Funeral Home - Sheldon.

Warren Vanden Brink, the son of Art and Ella (Jantzen) Vanden Brink was born on August 14, 1924 in Hull, Iowa. He attended school in Boyden and graduated from Boyden High School. He then went on to attend Mankato Business College in Mankato, Minnesota. Warren enlisted in the United States Army on March 18, 1943 and went overseas to Europe during World War II. He was honorably discharged on February 26, 1946 as a Tec 5 Corporal. On July 23, 1948, Warren was united in marriage to Shirley Merry in California. After their marriage, the couple resided in Sheldon where Warren ran Van's Highway Furniture Store for many years as well as being a sewing machine repairman. They retired to East Lake Okoboji. In 2014 Warren moved back to Sheldon where he lived at the Christian Retirement Home. Warren passed away on Tuesday, May 19, 2020 at Community Memorial Health Center in Hartley, reaching the age of 95 years, 9 months and 5 days.
Warren was a member of the American Legion, Eagle’s, and VFW. He enjoyed fishing and hunting.
Left to cherish Warren’s memory is his children and their spouses, Ron and Teri Vanden Brink of Molt, Montana, Larry and Shirley Vanden Brink of Leavenworth, Kansas, Linda and Peter Morton of Grand Junction, Colorado and Dave and Lisa Vanden Brink of Bend, Oregon; four grandchildren and six great-grandchildren; also other relatives and friends.
Warren was preceded in death by his parents, wife and great-granddaughter, McKenna.
To order memorial trees or send flowers to the family in memory of Warren Vanden Brink, please visit our flower store.