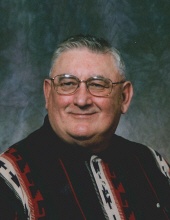 Visitation
with family present will be from 5 - 7 P.M
at the Eldridge Family Funeral Home in Primghar.

Arrangements under the care of the
Eldridge Family Funeral Home; Primghar, Iowa
WENDELL N. TJOSSEM
Wendell Norman Tjossem, the son of Howell and Amelia (Orthman) Tjossem was born April 22, 1934 in rural Gaza, Iowa. He received his education and graduated from Gaza High School. He was called into the Army and served during the Korean Conflict. He returned to the Gaza area and started farming with his father and on February 10, 1957, he was united in marriage to Beverly Jean Froehlich in Cleghorn, Iowa. After their marriage the couple made they their home in Gaza, Iowa, where they farmed for many years. He also operated a corn sheller and had trucks which he hauled various items including steel. He and Beverly wintered in Texas, and enjoyed music including dancing to waltz’s and polkas. They would also go to flea markets always looking for a bargain. Beverly preceded him in death on August 3, 2000 in Denver, Colorado. Wendell remained in the family home and passed away on Sunday, October 7, 2018 at his home reaching the age of 84 years, 5 months and 15 days.
He was a member of the Producers Co-op in Gaza, Iowa and former chief and member of the Gaza Fire Department. Wendell collected pens, tractors and was always known to tell a good story. He was very proud that his farm was in his family long enough to be honored by the State of Iowa as a Century Farm
Wendell is survived by three daughters, Wendy Klatt of Sac City, Iowa; Candy Roberts of Gaza, Iowa; Michelle Freeman of Sibley, Iowa; also nine grandchildren, Casey, Eric and Benjamin Klatt, Avery and Amelia Tjossem, Beau Roberts, Crystal Roberts Rouillard, Caleb and Jesse Freeman; eight great grandchildren, Kinnick, Knox, Nora, Kyle, Ciara, Emma, Bently and Liam; three sisters-in-laws, Darlene Miller of Dakota Dunes, South Dakota; Kathy Albels of St. Louis, Missouri and Marcia Huffman of Calumet, Iowa; also other relatives and friends.
He was preceded in death by his wife, a great granddaughter, his parents and parents-in-law.