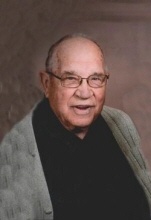 Visitation will be after 4 P.M. Thursday
with the Family present from 5 to 7 P.M. Thursday
at the Eldridge Family Funeral Home in Primghar.

The family invited relatives and friends to join them in the
fellowship hall of the church following the memorial service.

Willfred E. Gaudian, the son of William H. and Elma (Ebel) Gaudian was born December 10, 1929 in Granville, Iowa. He received his education and graduated from Paullina High School on May 20, 1948. He worked as a farm hand until he joined the Army on September 25, 1951 serving during the Korean Conflict and was discharged on June 25, 1953; he then enlisted in the Army Reserve serving from June 1953 until October 1, 1959. When he came home from the Army he returned to farming. On January 9, 1955 he was united in marriage to Dalorus Nagel at St. Paul Lutheran Church in Hartley, Iowa. The couple settled on farms in the Hartley and Primghar area where they raised their four children. The couple moved into Primghar in 1993. Willfred still enjoyed being and working on the farm even when he was in town and his health failed. He passed away on Sunday, July 24, 2016 at the Prairie View Retirement Home in Sanborn, Iowa where he had resided less than a week, reaching the age of 86 years, 7 months and 14 days.
He was baptized on December 29, 1929 at St. John Lutheran Church in Germantown, Iowa and later confirmed on April 2, 1944 at Bethel Lutheran Church in Sutherland. Willfred was currently a member of St. Paul Lutheran Church in Hartley. He was a member of the American Legion and Veterans of Foreign Wars. He enjoyed family times, the farm, collecting John Deere toy tractors and fishing.
Willfred is survived by his wife of over 61 years, Dalorus of Primghar; four children, Darwin (Jan) Gaudian of Primghar, Iowa; Cheryl (Wayne) Heitritter of Matlock, Iowa; Diane Gaudian of Greeley, Colorado; Glenda (Robert) Perkins of Navarre, Florida; eight grandchildren, Trinity (Mike) Harig; Matthew (Holly) Heitritter; Lindsay (Adam) Obbink; Kelsey (Josh) Van Beek; Darcy (Brian) Fritz; Danielle (Javan) Kruse; Andrew Perkins, Amanda Sue (Justin) Hasley; ten great grandchildren and four step great grandchildren; two sisters, Elaine Biery of Paullina, Iowa and Beverly Weredyk of Rincon, Georgia and one brother, Ronald (Kay) Gaudian of Bella Vista, Arkansas; also other relatives and many friends.
He was preceded in death by his parents, William and Elma Gaudian; a sister, LaVella Nielsen; a brother, Eldred Gaudian; and brothers-in-law, Donald Biery, Robert Nielsen and Jim Weredyk.
To order memorial trees or send flowers to the family in memory of Willfred E. Gaudian, please visit our flower store.