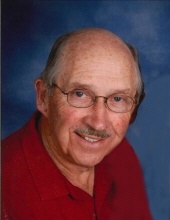 Services for William "Bill" J. Burns, age 84, of Sutherland, Iowa who passed away on Wednesday, January 13, 2021 at Banner-Baywood Medical Center in Mesa, Arizona. His funeral mass will be 11:00 A.M. on Friday, January 22, 2021 at St. Anthony's Catholic Church in Primghar with Msgr. Kenneth A. Seifried ~ officiating.
Burial will be at Calvary Cemetery in Sutherland.
Visitation will be after 3 P.M. on Thursday, January 21, 2021 with family present from 5 - 7 P.M. at the Eldridge Family Funeral Home in Primghar.
Masks will be required at the visitation and church.

William Joseph (Bill) Burns, the son of Edward and Clara (Klema) Burns, was born on December 20, 1936 in Sheldon, Iowa. He completed his education and graduated from Sutherland High School in 1955. On June 1, 1957, Bill was united in marriage to Bonnie M. Kleine at Sacred Heart Catholic Church in Sutherland, Iowa. Throughout their married life they lived in Sutherland. He was employed as a mechanic for Farquhar Motors. Following this, he was employed by the City of Sutherland and finished his career as foreman of O’Brien County Secondary Road Department, District 5.
Bill’s interests and hobbies were many: trap and cowboy shooting, hunting, gardening, animals and birds of all kinds, collecting Mobil memorabilia, driving his ’54 Chevy convertible to car shows, and riding bicycles, including tandem with Bonnie and they completed 25 RAGBRAI rides. They wintered 20 years in Mesa, Arizona. Bill’s faith was always especially important to him.
Bill passed away suddenly on January 13, 2021 in Mesa, Arizona at the age of 84. Left to cherish his memory are his wife, Bonnie of 63 years; his three children, daughter, Linda (Larry) Janssen of Paullina, Iowa, daughter, Lee Einck of Primghar, Iowa, and son, Jeff (Brenda) Burns of Royal, Iowa; nine grandchildren, Andy (Becky) Jacobs, Mike Jacobs, Daniel (Nichole Fintel) Jacobs, Mollie (Carlos) Camacho, Becky (Tony) Tjossem, Kellie Einck, Austin Burns, Emily Burns, and Korrie (fiancé, Chris Ewoldt) Einck; two step grandchildren, Hope (Josh) Greenslade and Larissa (James) Evans; seven great-grandchildren, Emmet, Will and Jolie Jacobs, Kaylee and Brenna Jacobs, Hailey Jacobs and Sadie Einck and two step great grandchildren, Bailey and Cole Tjossem. Bill was a very hard-working, caring, and giving man, willing to help his family and friends. He will be missed and loved by everyone.
To order memorial trees or send flowers to the family in memory of William "Bill" J. Burns, please visit our flower store.