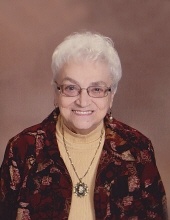 Services for Winona Kraai, age 86, of Sheldon who passed away on Thursday, May 26, 2022, at Sanford USD Medical Center in Sioux Falls, South Dakota. Her funeral service will be 10:00 A.M. on Thursday, June 2, 2022, at Vander Ploeg Funeral Home in Sheldon with Pastor Paul Van Maaren ~officiating.

Burial will be held at East Lawn Cemetery in Sheldon.

Visitation with family present will be from 5 - 7 P.M. on Wednesday, June 1, 2022, at the Vander Ploeg Funeral Home in Sheldon.

Winona K. Kraai was the daughter of William (Bill) Vande Garde and Kathryn (Dykstra) Vande Garde of Sibley, IA. Winona was born on November 11, 1935, in Sioux City, IA. At 5 months old, she was adopted by her parents from the Florence Crittenton Home. She was welcomed home by her older sister, Donna (Vande Garde) Brinkman, who was also adopted. After attending school in Sibley through the 9th grade, her family moved to Sheldon, IA where her parents ran the Handy Grocery store. She graduated from Sheldon High School and went on to attend Northwestern College of Orange City, IA on a music scholarship. On the weekends she helped her dad at the grocery store, and that is where she met Adrian Kraai. They were united in marriage on August 18, 1955 and began their life together on a farm southwest of Sheldon. Adrian and Winona were blessed with 4 daughters and 1 son. While raising their family, she worked in the Sheldon Sale Barn, and eventually transitioned to working at the Kountry Kitchen for many more years until she retired. Both Adrian and Winona were members of First Reformed Church of Sheldon, IA. She was an excellent baker & cook, enjoyed reminiscing about her childhood & wonderful parents, and played many card games with family and friends. Winona moved up to her eternal home with Jesus on Thursday, May 26, 2022 while her family gathered around her at Sanford Medical Center in Sioux Falls, SD at the age of 86 years, 6 months, and 15 days.

Winona was preceded in death by her parents, sister, sisters in law & their spouses, and husband of 62 years.

To order memorial trees or send flowers to the family in memory of Winona K. Kraai, please visit our flower store.