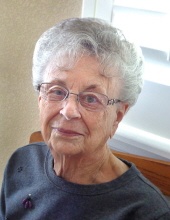 Visitation
will be from 12:30 P.M. until service time
at Zion United Church of Christ in Calumet.

Arrangements are under the care of the
Eldridge Family Funeral Home; Paullina, Iowa.
YVONNE MAXINE REHDER
Yvonne Maxine Rehder was born March 7, 1925 on a farm near Primghar, Iowa. She attended country school through the 8th grade. She began her high school education in Primghar and in 10th grade her parents, Clayton and Ida (Lemke) Merritt, moved near Gaza. She continued her education at Gaza Consolidated School and graduated. February 24, 1943 she was united in marriage to Burdette H Rehder, son of Emil and Hilda (Jurgesen) Rehder. The couple farmed near Gaza and were blessed with four children. In 1989, they moved to Calumet, Iowa while winters were spent in Mesa, Az. Yvonne moved to Colorado to be near her family in 2010.
She was baptized in the Methodist church of Hartley, IA and later confirmed at Zion's Evangelical and Reformed Church of Calumet, IA where she remained a forever member. She taught Sunday School, summer Bible School, and was active in Women's Fellowship. Her enjoyments were bowling, dancing, card playing, and being with friends and family. She also loved arts and crafts, sewing and embroidering, and most recent pastime of coloring.
Yvonne (Bonnie) leaves to cherish her memory, her children, Donna Dirks of Thornton, CO; Nancy and husband, Bruce Bappe of Lakewood, CO; Karla Dahlinger of Thornton, CO; David and wife, Ida Rehder, of Golden, CO; 6 grandchildren, Lisa and husband, Lance Murphy, Chad Dahlinger and fiancé, Danielle Kumaus, Brooke Dahlinger, Justin and wife, Lindsey Rehder, Kelli and husband, Jesse Preston, Michala and husband, John Markovich; 10 great-grandchildren; sister-in-law, Ruby Miller of Paullina, IA; brother-in-law, Curtis and wife, Betty Rehder, of Primghar, IA; and many relatives and friends.
She was preceded in death by her husband, son-in-law, Garry Dirks; grandson, Timothy Bappe; great-grandson, Tyler Murphy; her parents; 3 sisters-in-law, Margaret Perry and husband, Dale, Erma Gerstandt and husband, Edward, Shirley Ebel and husband, Roy; Eldon Miller, brother-in-law.

God saw you getting weary
He did what He thought best.
He put His arms around you
And said, “Come and rest.”
He opened up His golden gate
On that heartbreaking day
And with His arms around you,
You gently slipped away.
It broke our hearts to lose you,
You did not go alone.
A part of us went with you
The day God called you home.
To order memorial trees or send flowers to the family in memory of Yvonne M. Rehder, please visit our flower store.